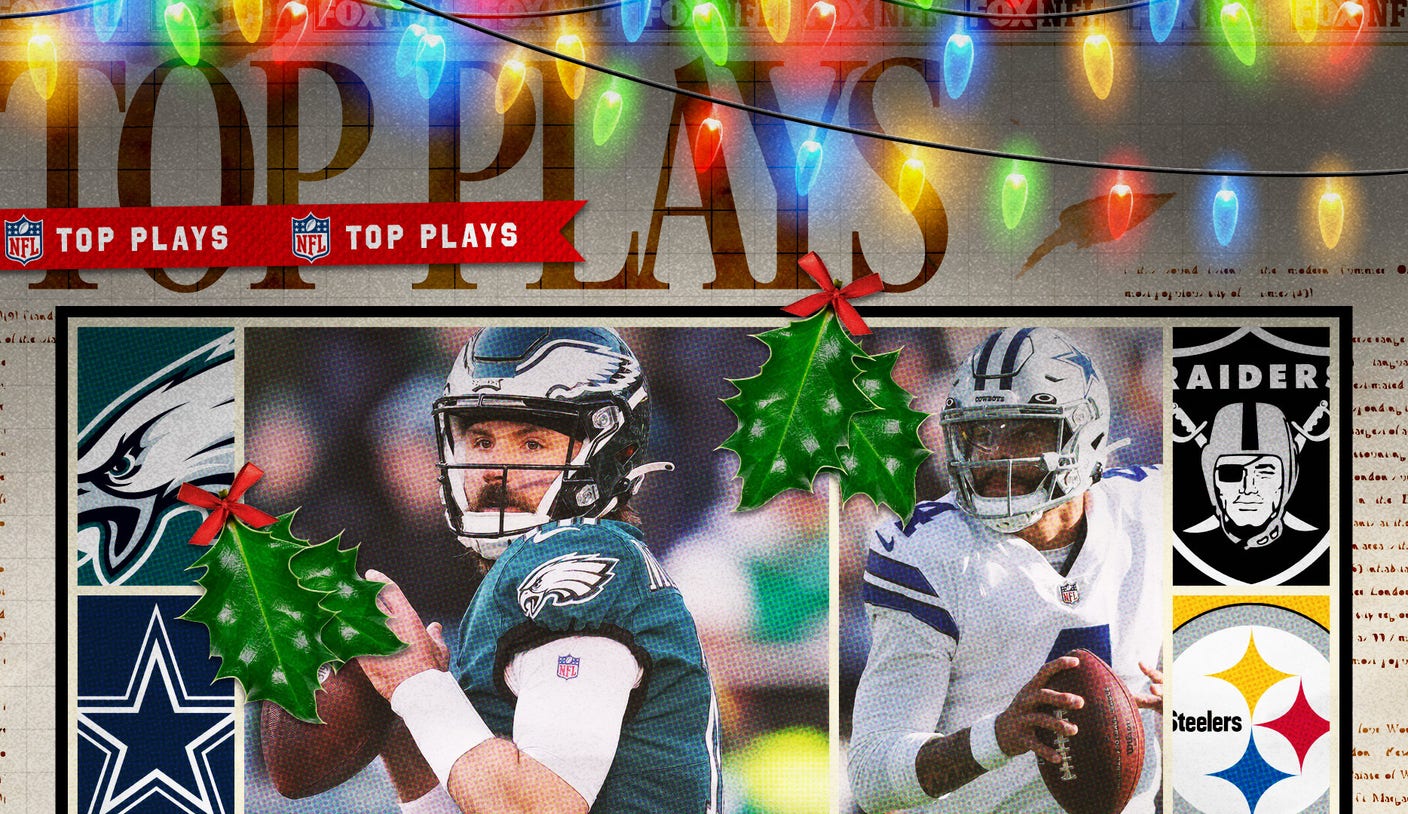 Week 16 of the NFL The season continues Saturday with an action-packed slate — and we’ve got you covered with all the must-see moments from around the league. As the playoff race continues to intensify, so does the winter weather, and frigid cold temperatures and gusty winds have already had a major impact on the Christmas Eve schedule.

Here are the top plays from Saturday’s slate!

Las Vegas started the game with a 14-play touchdown drive that took over eight minutes. Derek Carr hit wide receiver Hunter Renfrow, who put the moves on Pittsburgh’s defense and found his way into the end zone for a 14-yard score.

Pittsburgh and Las Vegas each punted on their ensuing drives, which was followed by the former missing a field goal and the latter punting once more.

In the closing minutes of the first half, Pittsburgh got a field goal on the board. It trailed 7-3.

Action right out of the gate!

Josh Sweat came up with a huge interception, picking off Dak Prescott and taking it 42 yards to the house to put Philly up 10-0 early.

Then, the Cowboys closed the gap slightly, 10-7, courtesy of a short scamper from Ezekiel Elliott.

Have to see it to believe it

In with the spin!

The turnover and subsequent busted coverage on the corner route by the Eagles defense allowed Dallas to take its first lead of the game, 14-10, early in the second quarter after CeeDee Lamb reeled in a 36-yard touchdown from Prescott.

The Eagles were back in the lead, 17-14, after Minshew took it in himself midway through the second quarter. Both teams traded off field goals ahead of the break to keep it a three-point game, 20-17, with Philly in the lead.

The Eagles started to pull away in the third quarter, after a wide-open DeVonta Smith touchdown made it a 10-point game, 27-17, early in the frame.

Dallas had other plans, however. A field goal and a Michael Gallup touchdown knotted things up once again headed into the fourth quarter.

Eyes on the prize

The Eagles answered with Smith’s second touchdown of the night, putting Philly ahead 34-27 in the fourth quarter. That marked the 36th-straight red zone score for the Eagles, good for the longest active streak in the NFL.

On the following possession, the Dallas offense didn’t waste any time charging downfield, thanks to that TY Hilton.

The Cowboys fired back with another Prescott-Lamb touchdown that evened things up once again. Then, Dallas added two field goals, the second coming after a costly Eagles fumble with less than two minutes remaining, to seal the win.

It was the 49ers that got on the board first, as Ray-Ray McCloud III took off 71 yards for the score.

Brock Purdy was picked off on San Francisco’s own side of the field afterwards John Jennings bobbled the ball and it landed in the hands of Commanders safety Darrick Forrest.

How’d he catch that?

The turnover led to a Washington score, as a rookie John Dotson reeled one in to knot things up headed into halftime.

The Niners kicked off the second-half scoring with a massive 34-yard touchdown from George Kittle. The four-time Pro Bowl tight end added another score two drives lateras San Francisco jumped out to a 21-7 lead late in the third quarter.

Taylor Heinicke connected with Terry McLaurinwho somehow managed to hold on to the ball with defenders on each shoulder, for a 51-yard pickup to put the Commanders deep in Niners territory.

Two plays later, McLaurin finished the job, reeling in a short pass from Heinicke for the score.

After the Niners added three field goals in the fourth quarter to extend their lead, 30-14, the Commanders put Carson Wentz in the game in place of Heinicke, and the veteran signal-caller got one score in before things ended.

Derrick Henry came up with a monster touchdown run to put the Titans on the board early against the Texans.

Just how did they draw it up?

Houston knotted things up late in the first quarter with a Davis Mills fumble-turned-touchdown, thanks to that Rex Burkhead.

Man on a mission

Rookie QB Malik Willis picked up his first NFL touchdown on a tough 14-yard run midway through the third quarter to give Tennessee the lead, 14-10.

Mills turned it Brandin Cooks late in the fourth quarter, and the veteran receiver came up in a big way for the Texans, punching in a 6-yard score to give Houston a 19-14 lead that they held on to until the end.

It was just the Texans’ second win of the season, snapping a nine-game losing streak.

The Joe Burrow–Tee Higgins connection was hot despite the freezing weather, picking up a smooth first-quarter score.

The Bengals added six more points when Burrow launched one to wideout Trent Irwinwho reeled in this pass under pressure while fighting off Patriots defenders.

Irwin added another score late in the second quarter to extend the Bengals’ lead to 22-0 at the break.

On third-and-29, Mac Jones sent up a Hail Mary to the end zone that somehow landed in Jakobi Meyers‘ hands for the touchdown. Just like that, the Patriots scored 18 unanswered points after falling into a 22-0 hole in the first half.

Down to the wire

After each team fumbled on consecutive drives, the Patriots ended up with the ball with less than a minute to play. They had to punt it away, however, and weren’t able to pull off the comeback.

Then, with momentum on their side, the Vikings were first on the board with a touchdown courtesy of TJ Hockenson.

After the Giants closed the gap to 10-7, Daniel Jones found Isaiah Hodgins for a dazzling 29-yard gain that brought NY fans to their feet.

Kirk Cousins launched one up for Hockenson, who didn’t let any number of Giants defenders keep him from scoring.

The Giants weren’t going down without a fight, answering with a score of their own on the following drive.

Saquon Barkley popped off for a 27-yard touchdown, and Daniel Bellinger came up with the two-point conversion to knot things up at 24 apiece as the two-minute warning approached in Minnesota.

In the end, it all came down to that Greg Josephwho nailed a 61-yard field goal as the clock expired to seal the home win.

The Panthers took the lead on their opening drive, thanks to the fancy footwork of Raheem Blackshear.

The Lions came back with an opening-drive score of their own, as Jared Goff connected with tight end Shane Zylstra.

Sam Darnold launched one to wideout DJ Moorewho came up with a jaw-dropping 47-yard grab, followed by a touchdown on the next play.

Just like that, Carolina had a 31-7 edge midway through the third frame and never relinquished the lead.

Justin Fields connected with a wide-open Dante Pettis on the Bears‘ opening drive to take a 7-0 lead over the Bills.

Gabe Davis reeled in a 19-yard touchdown pass from Josh Allen to make it a one-point game, 7-6, midway through the first quarter after heavy winds resulted in a missed extra point.

Buffalo kicked off the second-half scoring with a 33-yard touchdown rush from Devin Singletary, taking its first lead of the game, 14-10. Then, James Cook added a 27-yard touchdown run to extend the Bills’ lead, 21-10.

Fields found Velus Jones Jr. for a 44-yard gain before turning the ball over on downs early in the fourth quarter, as the Bills ran away with a double-digit win on the road.

After going three-and-out on their opening drive, the Chiefs bounced back in a big way on their second possession when Patrick Mahomes a hit Kadarius Toney for an 8-yard touchdown to give KC an early lead.

Chiefs running back Jerick McKinnon spun his way into the end zone, powering through two Seahawks defenders to extend KC’s lead to 14-0 midway through the second quarter.

What can’t he do?

Mahomes gave an all-out effort on his way to the end zone, diving for the pylon to put the Chiefs up 24-3 late in the fourth, as the Chiefs cruised to an easy win at home.

Just like that Falcons were able to cross into the red zone, Drake London couldn’t hold on to the ball, and Ravens linebacker Patrick Queen scooped up the fumble to give Baltimore the ball back.

The turnover was a golden opportunity for Baltimore. Tyler Huntley — in for an injured Lamar Jackson — connected with Demarcus Robinson in the corner of the end zone for six. It was the first touchdown by a Ravens receiver since Week 3.

The Ravens went on to hold off the Falcons and come out with the home win, 17-9.

The Browns defense picked off Andy Dalton just as the Saints crossed midfield, and the turnover resulted in a touchdown and a 7-0 lead for the Browns on the ensuing drive.

After trading field goals to close out the second quarter, the Saints got the third-quarter scoring started with an 8-yard touchdown rush up the middle from Taysom Hill. With that score, Hill set a new record for most rushing touchdowns by a non-running back in Saints history.

The Saints defense came up with a huge interception late in the third quarter on a tipped ball. The turnover led to a 4-yard touchdown rush from Alvin Kamara to give the Saints a 17-10 lead that they held until the end.

Get more from the National Football League Follow your favorites to get information about games, news and more