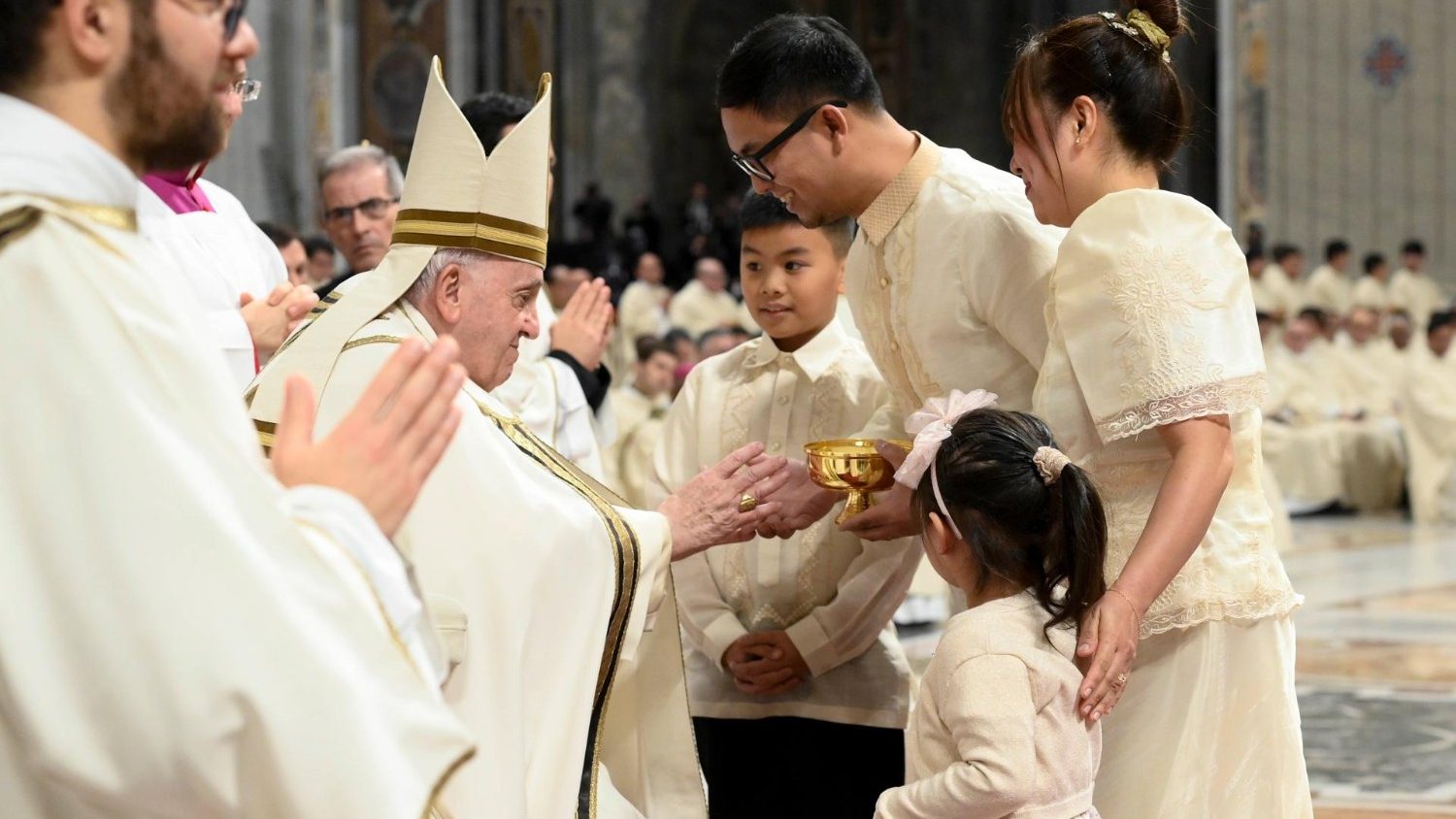 Pope Francis presides over Mass during the Night for the Solemnity of the Nativity of the Lord, and reflects on the closeness, poverty, and concreteness of the manger in which Mary laid the Christ Child.

“If you feel consumed by events, if you are devoured by a sense of guilt and inadequacy, if you hunger for justice, I, your God, am with you.”

As the Church celebrated the birth of Jesus Christ, Pope Francis offered that assurance to Christians around the world as he presided over Mass in St. Peter’s Basilica on Saturday evening.

In his homily, the Pope noted that the Gospel of Jesus’ birth seeks to “lead us to where God would have us go”, even as we rush around consumed by consumerist goals.

He focused his reflection on the importance that Luke the Evangelist places on the manger in which Mary lays her Son, noting that his Gospel repeats the term three times in the space of only a few verses (Lk 2).

With the little detail of the manger, he said, the Evangelist seeks to show us God’s “closeness, poverty, and concreteness” in His Son, Jesus.

Closeness in ‘manger of rejection’

Pope Francis said the manger can symbolize humanity’s “greed for consumption”, since it serves as a feeding trough that allows food to be consumed more quickly.

“While animals feed in their stalls,” he said, “men and women in our world, in their hunger for wealth and power, consume even their neighbors, their brothers and sisters.”

He lamented the proliferation of wars and injustice, and their deleterious effects on human dignity and freedom, especially that of children.

Yet, said the Pope, God’s Son is first laid precisely in that “manger of rejection and refusal”, making God present in even the worst conditions of human existence.

“There, in that manger, Christ was born, and there we discover His closeness to us. He comes there, to a feeding trough, in order to become our food.”

The Pope added that God is a Father who—instead of devouring His children—”feeds us with His tender love”, drawing close to us in humility.

Each of us can take heart in God’s closeness to our suffering and loneliness, he said.

“The Christmas manger, the first message of the divine Child, tells us that God is with us; He loves us and He seeks us.”

He said there is “no evil nor sin from which Jesus does not want to save us. And He can. Christmas means that God is close to us: let confidence be reborn!”

Pope Francis then turned to the message of “poverty” expressed in the manger, which was surrounded by very little except love.

“The poverty of the manger,” he said, “shows us where the true riches in life are to be found: not in money and power, but in relationships and persons.”

Jesus, added the Pope, is the greatest wealth we can achieve, especially when we learn to love and serve His poverty in the poor of our world.

“It is not easy to leave the comfortable warmth of worldliness to embrace the stark beauty of the grotto of Bethlehem, but let us remember that it is not truly Christmas without the poor.”

Finally, the Pope focused on the “concreteness” shown in Jesus, lying in a manger.

“A child lying in a manger presents us with a scene that is striking, even crude,” he said. “It reminds us that God truly became flesh.”

In every moment of His life, said Pope Francis, Jesus’ love for us was “always palpable and concrete” since He embraced the “roughness of the wood and harshness of our existence.”

As Jesus lay in a manger “tenderly wrapped in swaddling clothes by Mary”, Jesus shows us that He wants to be clothed in our love for those around us who are most in need.

Mass during the Night

Jesus gives flesh and life to our faith

Pope Francis also invited everyone to celebrate Christmas by doing something good for others, in order to let “hope be reborn anew in those who feel hopeless.”

“Jesus, we behold you lying in the manger,” he prayed in conclusion. “We see you as close, ever at our side: thank you Lord! We see you as poor, in order to teach us that true wealth does not reside in things but in persons, and above all in the poor: forgive us, if we have failed to acknowledge and serve you in them. We see you as concrete, because your love for us is palpable. Help us to give flesh and life to our faith.”