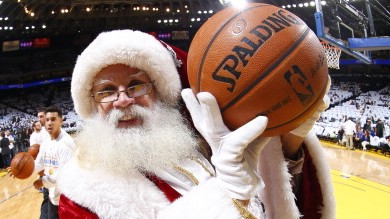 The NBA’s Christmas Day slate of five games feels a lot like the season itself. When we first saw the list when the schedule came out we were all-inbut as the season started to play out and the injuries came, the excitement wore off a little.

The star power is still there — LeBron James, James Harden, Joel Embiid, Giannis Antetokounmpo, Luka Doncic, and the list goes on — but the matchups are not quite as intriguing. Let’s rank the NBA’s five-game slate from “I should use this time to go talk to Uncle Ed and get it over with” to “turn that NFL game off, it’s NBA time.” (All five games will be shown on both ESPN and ABC, and all times listed here are Eastern.)

This might have been the best game of the day — the Warriors eliminated the Grizzlies in a trash-talking playoff series last season that later, the Warriors would admit privately, was the toughest matchup of their title run. Memphis thinks it might have won that series if not for Ja Morant’s fluky injury and as soon as the series ended Morant was calling for a Christmas Day rematch. He got his wish.

Then Stephen Curry injured his shoulder. He is out and the luster comes off this game as the Warriors — who had stumbled this season when Curry was healthy and playing at an MVP level, maybe Draymond Green punching Jordan Poole in the face has something to do with that — are 1-3 since he went out with a bottom-10 offense over that stretch and the worst defense in the league as well (which speaks to effort and focus). Poole will try, but he’s no Curry.

Tune in to watch Ja Morant, the most exciting and entertaining player in the game today. Tune in to watch the Grizzlies’ defense, which has been the best in the league since Jaren Jackson Jr. returned from injury (102.1 defensive net rating over their last 10 games), locking teams down in the halfcourt. But just ask the Bucks, this game could become a blowout and if you want to flip over to it Buccaneers vs. Cardinals on NBC we’re not going to blame you.

Another game taken down by injuries. It might have been taken down before that as the Lakers were stumbling and unimpressive early, but they had their moments thanks to Anthony Davis playing center again and at an All-NBA, maybe MVP-ballot level. Now Davis is out with a foot injury and the Lakers are 1-3 without him, losing their shoes and their latest game to the lowly Hornets. With Davis out coach Darwin Ham has had to lean into smaller lineups to find scoring, but that hurts an already underwhelming defense.

LeBron James vs. Luka Doncic will always provide some spark, and you should tune in to watch MVP-level Luka. The Mavericks are also unveiling their Dirk Nowitzki statue outside the stadium before the game, which will be worth watching. Thigh the trade speculation around these teams could be more interesting than the on-court play itself.

The NBA’s nightcap game will be worth staying up for — these are two of the top four teams in a wide-open West, and Nikola Jokic is always worth watching.

The real question about how watchable this will be is this: Will Devin Booker play? He has missed the last three Suns games with a groin injury. This season he has taken control of the Suns’ offense and has had some monster nights, and this could be another one going against a Nuggets team that seems to have a “take it or leave it” relationship with defense (24th in the league) . The Suns are already without Cameron Johnson and Jae Crowder, which doesn’t help their defense against a deep Nuggets squad. Tune in to watch Jokic, plus Michael Porter Jr. is expected back and Aaron Gordon has been on a hot streak lately. Denver isn’t on top of the West by accident.

Before stumbling in its last couple, New York had won eight in a row and shot up the standings in the East thanks to Tom Thibodeau’s team coming around on defense. Once Thibs finally leaned into the untradable Quentin Grimes and gave bench minutes to Miles McBride (and, sadly but understandably, not Derrick Rose) this team started to come together. New York has the second-best defense in the NBA over their last 10 games, and a 104.1 defensive rating.

But can the Knicks slow Joel Embiid?

Embiid leads the NBA in scoring at 33 points per game on 52.8% shooting, he can shoot the three but is primarily a beast in and around the paint, and the Knicks have nobody who physically matches up with him well. Throw in the fact James Harden is getting his legs under him — 20 points, 21 assists, 11 boards against a full-strength Clippers team Friday — and the 76ers are a tough team to stop.

Philadelphia has won seven straight, but how will it deal with the Christmas energy in Madison Square Garden and a Knicks team that Jalen Brunson has believed? Christmas Day in the Garden leads to special moments. Maybe the Knicks will get another 44-point RJ Barrett game like they did Friday against the Bulls (in a loss where New York fell apart in the final minutes). This is an Eastern Conference rivalry where both teams come in playing well, and it should be a perfect way to start your Christmas sports viewing day.

The two best teams in the NBA this season, clear and away, go head to head. This is what the NBA does best on Christmas. Jayson Tatum and Jaylen Brown has been the best duo in the NBA this season, with Tatum playing at an MVP level. Giannis Antetokounmpo is playing like an MVP as well. Khris Middleton may be out (right knee soreness) but both of these teams are deep with good players who have stepped up on the biggest of stages — Jrue Holiday, Marcus Smart, Brook Lopez (looking like a DPOY candidate), Al Horford, and the list goes on and on.

Plus, nothing breeds animosity and a rivalry in the NBA like familiarity, and this will be the 15th meeting between these teams in the past two years. The Celtics eliminated the Bucks in an epic second-round series last playoffs.

Both teams have been a little flat of late, hitting some mid-season doldrums, but both sides will be up for this one. This is the game of the day — great teams who will want to make a mid-season mark on the other. This game is a must watch. If that means going into the other room to get away from your family, they will understand.

Check out more on the Lakers